Story One - A friend is going through a job change. She was working on getting out more, and walked in to an Arlington County job assistance center in Ballston. She wanted to leave invitations for a free job search techniques presentation by a nationally known outplacement consultant that was being given in DC.

A clerk took the handouts, then went into the back room to get a ruling: “You can’t leave them here. We compete with you and your group has been known to charge money.”

Story Two - I was walking in the alley behind my house. An angry man in a uniform came out and said I had to get out of the alley, it is private property. I had set up the alley while president of my condo association, and one key law was that those alleys are public way that we had to leave enough space for fire engines to get through. However, this guy, in addition to making up his own facts, was abusive and spoiling for a fight, so I walked on. Thank you, Allied Barton.

Story Three – I needed to renew my passport. I downloaded the forms and took the package over to the passport office on 19th Street. I was told if I didn’t send my application to Philadelphia, there was a hefty convenience fee for dropping it off in the center of the DC business district. If it’s not a public service facility, why is my government paying that rent?

Who makes up these “rules?”

Bureaucracy goes back past the Greeks, and the Greeks, Romans, French, and Americans have a uniformly low opinion of it. Turns out a bureaucracy is principally known as a pile of uncontrolled functionaries, issuing rules that benefit the rule makers. There is a German who thought bureaucracy was advanced, so there you go.

The chief benefit of maintaining a bureaucracy is that it is a bitch to dismantle. It’s a rice bowl issue.

What alternatives might be used?  After all, recently we’ve got an internet, social media, enlightened self interest, etc. 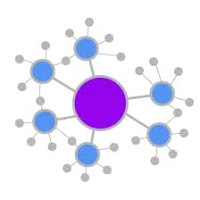 A couple of years ago I noted that effective management model was based on a a network, using appropriate resources as necessary. Sometimes I lead, sometimes I support, the key is focus on providing value.


Earlier this year, General Stanley McChrystal gave a presentations at FOSE when he shared that in order to beat al Qaeda, they had to organize more like al Qaeda...in a network structure.

So there are alternative structures, which can deliver improved performance. The key to creating more value is to decide to create value, wherever you can.

Trading intense focus on self and personal ricebowl for effectively dealing with the task at hand is a common underlying trait for better organization, esprit de corps, and results.

WordPictures – Phrases That Lit The Bulb!
Posted by Thoughthebrowser at 7:06 PM